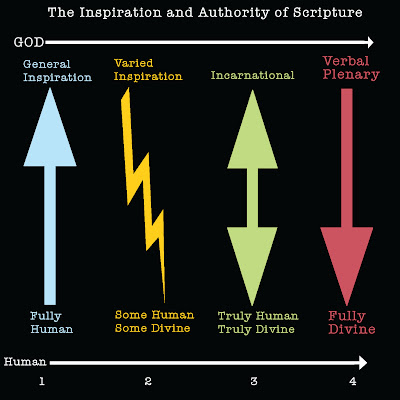 General Inspiration
"Arrow number 1 represents the belief that the Bible is inspired in the way that, let's say, Shakespeare was inspired. I call this the 'general inspiration' of Scripture.  According to this view the Bible is fully a human work; God did not inspire it in any direct sense. The biblical writers wrote when 'the muse' (Greek deities of artistic inspiration), rather than the Holy Spirit, 'was upon them.'

In this view, the Bible should be approached like any other book that has had culture-shaping influence. After all, the Bible has numerous characteristics in common with other books or ancient texts. It contains inconsistencies and apparent contradictions, and there are variants among the manuscripts. Readers who take this view of inspiration are likely to employ an inductive, to be distinguished from a deductive, method of assessing the evidence from the Bible about the Bible.

For example, a reader discovers that there are differences among the Gospels. The wording and the ordering of the stories they have in common are sometimes inconsistent. The Gospel of John, for instance, places the cleansing of the temple on the day of Christ's triumphant entry into Jerusalem at the beginning of Christ's ministry. The other Gospels place it much later. In acknowledging this, the reader's understanding of biblical inspiration begins to change. It is becoming more inductive; that is, he or she begins to look at what is in the text and then draws conclusions about the Bible based on what is there. A deductive approach might reason that, since the Bible is accurate in every detail, the contradictions are in the way a reader interprets them. Readers might then put a great deal of effort into resolving 'apparent contradictions.'

Many differences of detail such as these appear in the Bible. These, along with other textual problems, are cited as justification for the general inspiration point of view about the very human nature of the Bible. Humans, however, are not capable of a purely inductive or a purely deductive approach to learning. Those who begin 'from below' also bring assumptions to the process of interpretation, and an approach that leans toward the inductive does not necessarily render one's view of the Bible 'low.' "

Varied Inspiration
"According to 'varied inspiration,' number 2 on our diagram, some passages are included in the Bible by God's will. Others are not. Inspiration is like an uneven landscape. Even where the inspired parts of Scripture are concerned, some passages are inspired differently than others, and for different purposes. This is reflected in the liturgical invitation to 'listen for,' instead of 'listen to' the Word of God.

The distinction between aspects that are and are not inspired by God can sometimes be arbitrary from the varied inspiration perspective. That is not to say that readers who take this view are not thoughtful and discerning. Discussing the issue, one of my students, for example, pointed out 'that certain parts of the Bible are more or less related to Christ, and, hence [more or less immediately instructive], for Christians.' In my opinion, the entire Bible is intended by God for our instruction, but inspiration correlates with genre and discernible intention, and to determine this sometimes requires vigorous wrestling with the texts in their contexts."

Verbal Plenary
"Arrow number 4 points downward. The belief that God guided every word of the writers of Scripture is frequently referred to as 'verbal plenarism.' You know the word verbal: It comes from the Latin verbum, meaning 'word.' The root of the word plenary is the Latin plene, which means full. In this view, God not only inspired the writers, God fully inspired them. In the strictest verbal plenary view, every word is God's Word, and every jot, tittle, and dash in Scripture is meant by God to be there.

The perspective of verbal plenary inspiration is justified by the belief that the Bible attests to its own inspiration. It is in this sense self-authenticating. The key texts that testify to this conclusion, among others, are the ones we considered in the previous chapter: 2 Timothy 3:16, 2 Peter 1:20-21, and John 10:35. In the latter verse, the way Jesus treated the Hebrew Scriptures is the focal point. In this approach the Bible is interpreted deductively, which is to say the interpreter adheres to a theology of the Bible into which the facts must be fit. Gleason Archer, quoted earlier, approached the Bible from this kind of perspective. Paul Achtemeier did not.

When they encounter problems with the text, interpreters from the verbal plenary perspective are forced to try to reconcile differences. In the end they are forced to acknowledge that their belief in the verbal and historical inerrancy of Scripture is based on assumptions about the so-called 'autographs' - the original biblical texts. None of these are extant, so there is great effort to reconstruct them. This process raises yet other questions. Multiple authors and editors created some books of the Bible. At which point in that long process did the text become inerrant? We are left with the texts we have in hand; it is their status that is most relevant to us here and now."

The incarnational view of the Bible affirms that the manner in which the scriptural message has been preserved is in itself intended by God to teach us something. That something is that God does not violate our humanity - by, for example, treating us as if we are hand-puppets, with no personal history, contexts, or points of view of our own - in order to communicate with us, just as, in orthodox Christian thought, the Incarnation did not violate the human whom God the Eternally Begotten became.

On the other hand, those through whom God spoke did not impede the divine purposes for their inspiration, just as the humanity of Jesus did not pollute the Word made flesh. We can observe, then, that incarnationalists are plenarists, of a sort. They are not, however, verbal plenarists. They do not believe God guided the word choices of the writers and editors of the Holy Scripture. They also share traits of the varied inspirationists, believing that the inspiration of the Bible is like an uneven landscape, with depth, texture and a plethora of diversity. That diversity must be considered fully when listening for God. Still, in its diversity, the Bible is one, unified, through God's inspiration of it. The whole Bible is inspired and used by God to shape us into the people God intends us to be.

The incarnationalist understands inspiration to be 'from above' - from the transcendent God - but it involves the full participation of immanent sources, which God the Spirit uses 'from below.' The texts express the humanity of their authors, including personal experience, idiosyncrasies, and contexts.

Rightly considered, contexts serve rather than inhibit the communication of meaning. While contexts do not fully determine meaning, they are vital aspects of meaning. Form cannot be separated from content any more than content can be divorced from form. As I said, humanness was not overwhelmed in this expression (or incarnation) of God's Word.

Notice that I said "God's Word" rather than "God's words." We must keep clearly in mind that the Bible is only the penultimate expression of God's speech, and that only Christ is ultimate. Only Christ was God. 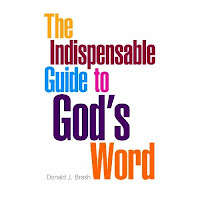 The above excerpts were taken from The Indispensable Guide to God's Word by Donald J. Brash, Ph.D.  This small, 133-page book is very easy to understand as it is written for lay audiences and beginning students. Nevertheless, it is still a rigorous discourse on the nature of the Bible and hermeneutics (the field of interpreting texts).  Through case studies and concise chapters (including summaries and review questions), Dr. Brash explores the foundations of interpreting texts, particularly the Bible as the Word of God. These foundations include introductory content on philosophy (epistemology and ontology), the theological concept of 'revelation', the nature of language, the historical process of the biblical canon, and much more. Having now read through The Indispensable Guide to God's Word twice, I testify that this is a little book with BIG ideas  - and a great help for understanding how to read "The Book."